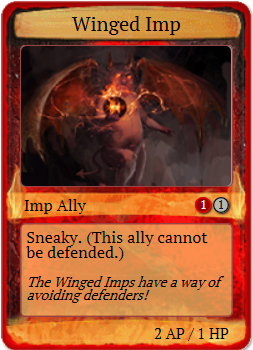 Winged Imp is a low-stat (2AP and 1 HP) but practically unstoppable card, thanks to its ability Sneaky. Sneaky prevents all allies from being able to defend against it, allowing it to attack undaunted. Winged Imp does well when paired with Rile Up, Grow Big, and other AP-enhancing actions. Don't use Winged Imp with Orb of Hostility, though-- you'll end up helping your opponent out by accidentally getting rid of him! Also, don't defend with Winged Imp unless really needed, it isn't worth it.

Strong against: Defensive and ally-dependent decks.

Retrieved from "https://occg.fandom.com/wiki/Winged_Imp?oldid=4737"
Community content is available under CC-BY-SA unless otherwise noted.