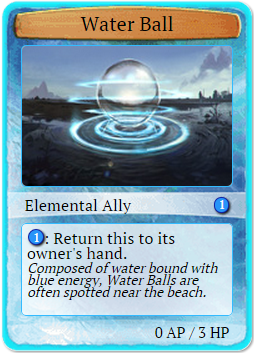 Water Ball is an inexpensive ally to play, costing just a single blue energy, but doesn't supply much purpose. It is a 0AP/3HP Elemental ally that you can return to your hand for the cost of a blue energy. It's used best to block a 1AP or 2AP ally, since it can be bounced back to your hand and played it again at the full 3HP. It's normally a poor use of energy when you could be playing more high impact allies, like Deep Sea Guard, which would likely just kill the 2AP ally when blocking against it; still, it can help you bide your time to get out of a sticky situation. Also, if you need as many cards as you can on the field, Water Ball combined with Develop or Grow Big can be a big help.

Strong against: low-stat allies that need to be defended against, over and over.

Retrieved from "https://occg.fandom.com/wiki/Water_Ball?oldid=4940"
Community content is available under CC-BY-SA unless otherwise noted.