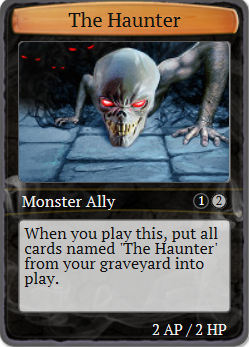 The Haunter is a good way to fill up the battlefield all in one turn, effectively defending against many of your opponent's allies. It has medium-strength AP and HP, and can be used to both attack and defend. Haunter is easy to bring back to life, especially if your deck has all four. Be careful when using skeletons or skeleton-spammers like Bonemancer in the same deck, though-- you might accidentally remove your Haunters from the game! Also, watch out if you have Cemetery Gate. You might accidentally sacrifice all four Haunters and not be able to bring them back again.

Retrieved from "https://occg.fandom.com/wiki/The_Haunter?oldid=4645"
Community content is available under CC-BY-SA unless otherwise noted.