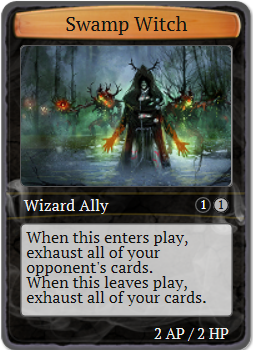 The Swamp Witch is good to play as an ally version of Slime Rain, when your opponent has many defense cards that can potentially stop you from winning the game. With only 2AP/2HP and a play cost of 1 black and 1 normal energy, it's a pretty mediocre ally. However, the timing for this card is important-- it swamps your opponent, exhausting all their cards when it comes into play, leaving them unable to defend against whatever powerful ally you're attacking with. However, this card is risky-- When it leaves play, it exhausts all of your cards as the swamp tide recedes,  making you defenseless against whatever the opponent has in store. Keep Swamp Witch safe until a turn where it doesn't matter much if your cards are exhausted. If defending against several allies, defend with Swamp Witch last (otherwise, after Swamp Witch dies, you won't be able to defend against anything else).

Weak against: Direct damage action cards (the opponent can use a card such as Vampiric Bite when they attack to eliminate Swamp Witch and exhaust all your allies, leaving them unable to defend).

Retrieved from "https://occg.fandom.com/wiki/Swamp_Witch?oldid=4646"
Community content is available under CC-BY-SA unless otherwise noted.