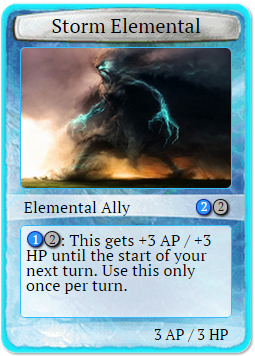 Storm Elemental is a little over-priced at 3AP/3HP for 4 energy (2 blue and 2 colorless) but it can actually do some work if you have extra energy. For 3 energy (1 blue and 2 colorless) you can grant this +3AP/+3HP until the start of your next turn. The catch here is that if it takes 3 damage after you attack with it the 3HP it gains doesn't do it much good, as it will still die when your next turn begins with the loss of its bonus HP. The easiest way to get around this is to wait to use it until an opponent makes a mistake by attacking with a 4 or 5 AP ally, then pump your Storm and block. During your main phase, attack, as Storm Elemental will die on the next turn anyways. You could also return it to your hand if you have Orb of Fluidity or King Matsu. You can also wait until the opponent doesn't have any allies left to attack with this, or just bypass everything by pairing it with Sacrificial Altar.

Strong against: other strong allies, as well as extremely weak allies.

Weak against: strong allies (yes, it's a paradox-- Storm will eliminate the other ally and die in the process, both hurting and helping)

Retrieved from "https://occg.fandom.com/wiki/Storm_Elemental?oldid=4949"
Community content is available under CC-BY-SA unless otherwise noted.