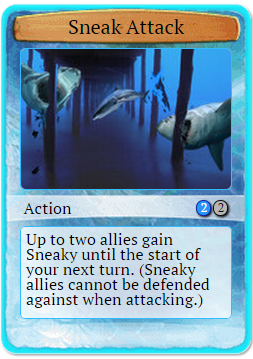 Sneak Attack is an action that grants two allies the ability "Sneaky" when you play it. Play this on a few large allies and you can attack without fear of your opponent blocking you! Ally destruction cards and Transmute to Butterfly can still stop you, though-- watch out!. Transmute will even remove Sneaky and allow your opponent to block and kill your ally. Still, this is a valuable finishing card in a board still, similar to Swamp Witch and Slime Rain.This card doesn't effect the battlefield at all on its own, but paired with another card that has a similar effect (like Mist Machine) your opponent will be unable to do anything about your sneaky attackers.

Weak against: Transmute to Butterfly

Retrieved from "https://occg.fandom.com/wiki/Sneak_Attack?oldid=4920"
Community content is available under CC-BY-SA unless otherwise noted.