The Skeletal Warrior is a good card to play at the beginning of a game just to get an ally out. This works best when sacrificing another ally you won't need anyway in order to play it and get a slight advantage over your opponent. Its 2 AP and 1 HP makes it an okay beginning/defending ally, but a better card to use would be Bonemancer because it can spawn skeletons at will or The Haunter because they come back to life. However, it is still a good staple for any black deck. Also, this is great to use (along with other 1hp/1ap pawns) as a sacrifice to help the Soulseeker.

Weak against: Direct damage actions, as well as fast decks like the starter deck Red Menace. 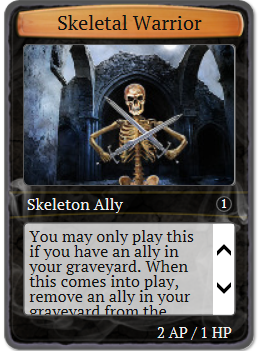 Retrieved from "https://occg.fandom.com/wiki/Skeletal_Warrior?oldid=4493"
Community content is available under CC-BY-SA unless otherwise noted.