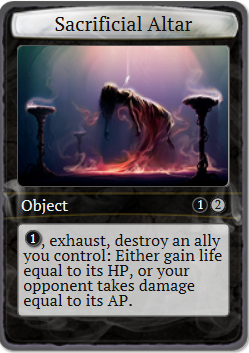 Sacrificial Altar is a staple card in several strategies, having many uses. Altar functions as both a healer and a way to deal direct damage to your opponent-- at the cost of your allies and energy. You can play this along with the Soulseeker and sacrifice many weak allies to regain HP lost when the other side attacks, then use your strong Soulseeker against your opponent or sacrifice him to damage the enemy. Another good way to use this card would be to play several high-AP allies and sacrifice them right away, damaging your opponent. Watch out, though-- sacrificing all your allies will leave you undefended against an onslaught of attacks from your opponent!

Weak against: High-speed aggro decks, as well as Fresh Force and Cryptic Pillars.

Retrieved from "https://occg.fandom.com/wiki/Sacrificial_Altar?oldid=4625"
Community content is available under CC-BY-SA unless otherwise noted.