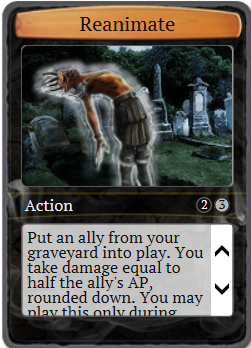 Reanimate is a tricky card to get right, but it can be very useful.It's a 5-energy (2 black energy and 3 colorless energy) action card that can only be played during your Main phase. It allows you to revive one ally from your graveyard, but you take damage equal to half the ally's HP (rounded down). It's good if you desperately need an ally in play and have none in your hand, but if you're reviving a strong ally like Merran Strike Force, you might accidentally kill yourself if it's at the end of the game. Be sure not to revive Evil Incarnate with this card, because if you already took 8 damage from playing it (4 for it coming into play and 4 from half of its AP), you'll have to suffer another 4 and will probably lose with only 6 HP left.

Retrieved from "https://occg.fandom.com/wiki/Reanimate?oldid=4880"
Community content is available under CC-BY-SA unless otherwise noted.