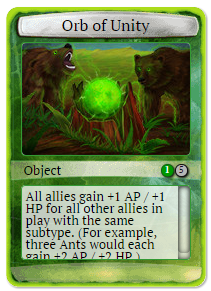 Strong against: Decks that are focused on several powerful allies, in which case your opponent would not be able to defend against a large amount of ants with only several cards of their own.

Weak against: Object removal decks and heavy ally removal cards like Killer Wave, which can drastically damage your onslaught of ants.

Retrieved from "https://occg.fandom.com/wiki/Orb_of_Unity?oldid=5016"
Community content is available under CC-BY-SA unless otherwise noted.