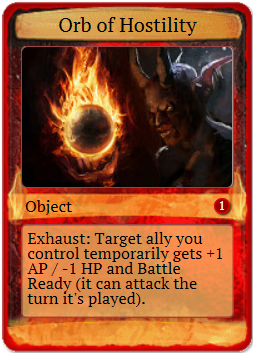 Orb of Hostility is one of the 6 Legendary Orbs of Orbworld, rumored to be owned by Agnu the Volcano Lord. It can grant any card the ability Battle Ready, as well as +1AP and -1HP. Costing only 1 red energy, it can be played on the first turn of the game, and used soon after. Careful, though-- if used on an ally with 1HP, you'll accidentally kill your own ally, hurting yourself instead of your opponent.

Retrieved from "https://occg.fandom.com/wiki/Orb_of_Hostility?oldid=4718"
Community content is available under CC-BY-SA unless otherwise noted.