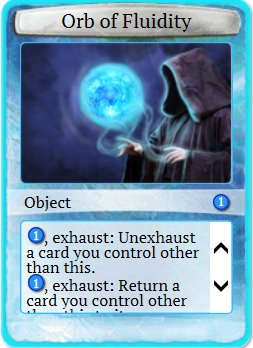 Orb of Fluidity is useful in almost any deck, as it can be used in combination with many of different colors due to its ability to return cards. The card can be used in many different ways:

Defend against an ally, return back to hand and play again for full HP, or if you feel that the ally has done its job, you can convert it for energy.

Bench a Killer Wave, and return your allies back to hand, clearing the board. This is an effective way to give you card and momentum advantage.

If you are getting overrun with small allies, you can use the orb's ability to unexhaust your defender for another defend, given your ally has enough HP to do so. Defending more than once is not the only use of unexhaust, though. You can unexhaust basically anything in the game, which means you can use objects/allies that gets exhausted on use multiple times per turn.

Strong against: Decks with low-stat allies, so you can defend against many of them without losing your allies.

Retrieved from "https://occg.fandom.com/wiki/Orb_of_Fluidity?oldid=4795"
Community content is available under CC-BY-SA unless otherwise noted.