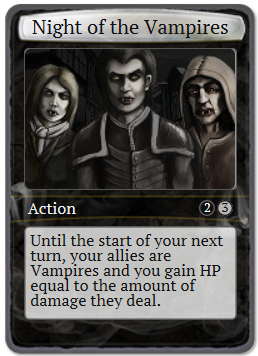 For one turn, when you play this 2 black/3 normal cost action card, all your allies gain the subtype "Vampire Ally". Vampires restore your HP the same amount of damage they deal 3 damage (so, if a vampire Ally deals 3 damage to an opponent ally or player, you will directly gain 3 HP). If you have a lot of allies on the field, this could put you at a large advantage due to your resulting high HP. However, it can only be played during your Main phase. Night of the Vampires can also be combined with Orb of Unity for a hard-to-play, but extremely powerful, Vampire Forest strategy.

Weak against: Interfere, having only a few allies.

Retrieved from "https://occg.fandom.com/wiki/Night_of_the_Vampires?oldid=4676"
Community content is available under CC-BY-SA unless otherwise noted.