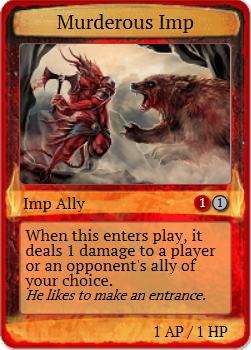 Say you've started a game using your favorite red deck, Red Menace, when you realize that your opponent is using the exact same deck! How can you win, if the decks are the same? It all comes down to luck, doesn't it? Well, not quite. There are tricks to get ahead of your opponent in cases like these. Now, pretend your opponent had their first turn and played a Mischievous Pyro. It's your turn now, and you've got 2 energy, but your opponent has made the first move and has the advantage. What if you play a Murderous Imp?

Since Murderous Imp does 1 direct damage to any ally of your choice upon entering play, you can get rid of your opponent's ally at the same time as playing your own, giving you a unique edge (two birds with one stone!). If you have a Murderous Imp but your opponent hasn't played anything yet, bench your Imp and wait-- doing 1 damage to a low-HP ally will have a lot more impact than 1 damage to your opponent.

Strong against: low-HP allies and fast decks (Murderous Imp is a good defender!).

Retrieved from "https://occg.fandom.com/wiki/Murderous_Imp?oldid=4731"
Community content is available under CC-BY-SA unless otherwise noted.