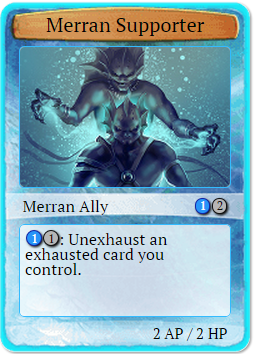 Merran Supporter is basically King Matsu's younger brother. Costing 3 energy (a blue and 2 colorless), the Supporter is a 2AP/3HP ally, just like the King. His ability is a little more universally useful, as you can use it to unexhaust as ally and block with it, but it costs a blue and a colorless energy to use. Like the King and unlike Orb of Fluidity, the Supporter does not exhaust to use its ability, so it can be used multiple times on the same phase.

Where this card is particularly useful is in a blue/yellow control deck where if can be used to unexhaust cards such as Castle Sharpshooter, and War Horse to either damage enemy allies, or prevent your allies from being damaged.

Weak against: direct damage cards such as Shoot a Fireball

Retrieved from "https://occg.fandom.com/wiki/Merran_Supporter?oldid=4891"
Community content is available under CC-BY-SA unless otherwise noted.