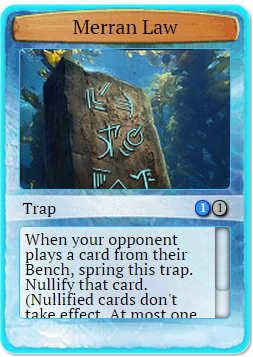 Merran Law is a two energy (a blue and a colorless) trap card that nullifies (prevents, if it's an action; destroys, if it's an ally or object) the next card your opponent plays from the Bench. This card works against develop-type decks, but is generally weak as you don't know what you are going to prevent your opponent from playing. If your opponent loads up their bench it is often better to play an Honor Wizard or an Apocalypse, but Merran Law can work in a pinch.

Retrieved from "https://occg.fandom.com/wiki/Merran_Law?oldid=4990"
Community content is available under CC-BY-SA unless otherwise noted.