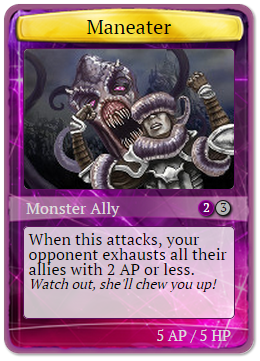 Maneater is a situational ally because of her special ability to exhaust allies with 2AP or less, and works great in a control deck. When playing with Maneater be sure to make room in your deck for cards that can support her special ability while also being useful to your deck. Such cards include Freeze Trap, Transmute to Butterfly and Frighten to Death. Being able to exhaust that body left behind means you are somewhat nullifying the drawbacks of previously mentioned cards, and threaten direct damage before your opponent gets the chance to play another ally. Of course, it's also very nice that nothing with 2AP or less can defend against Maneater when she attacks. This is great against black, red and green filler decks.

Strong Against: Anything with 2AP or less and low-stat ally decks like Ants Attack.

Weak Against: Aggro and quality decks.

Retrieved from "https://occg.fandom.com/wiki/Maneater?oldid=4771"
Community content is available under CC-BY-SA unless otherwise noted.