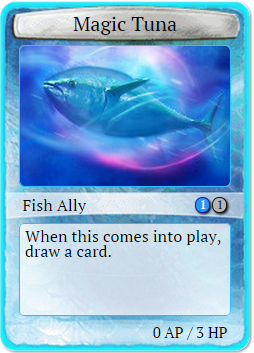 Magic Tuna is a staple in many blue decks. For 1 blue and 1 colorless energy, it's a 0AP/3HP fish that allows you to draw an extra card when it enters play. It's very easy to view this card as something that does little more than replace itself like Decoy, but Magic Tuna can do much more. If used with cards with repeatable bounce abilities like Orb of Fluidity or King Matsu you can play this card over and over to draw lots of extra cards. This makes Magic Tuna one of the easist cards to use to gain card advantage with, if played well.

Retrieved from "https://occg.fandom.com/wiki/Magic_Tuna?oldid=4884"
Community content is available under CC-BY-SA unless otherwise noted.