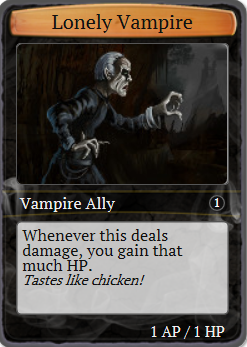 Lonely Vampire is great to play at the start of the game for a few extra HP. He costs only 1 energy, which helps to get him out as soon as possible, and is best when used as a wall against any attacking allies early in the game. Combo him with Soulseeker as a sacrifice, or bring him out as early as possible for some extra leverage. However, other cards such as the Vampire Prince or Night of the Vampires are a better way to use vampire allies' HP-draining ability.

Weak against: Almost everything!

Retrieved from "https://occg.fandom.com/wiki/Lonely_Vampire?oldid=4637"
Community content is available under CC-BY-SA unless otherwise noted.