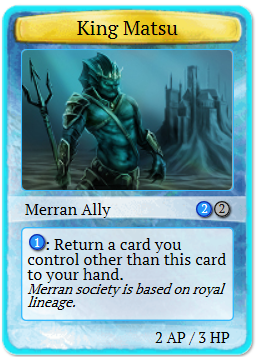 King Matsu certainly is the King of blue decks. As a 4 energy (2 blue and 2 colorless) 2AP/3HP ally he looks underwhelming, but it's his ability that shines. You can pay a blue energy to return any creature you control back to your hand-- and he doesn't even exhaust! This means he can use his ability the turn he comes into play, and as many times a turn as you have the energy. With the ability to return a creature or object card you control back to your hand, he is a control player's dream come true. Try combining this with School of Fish for as many fish as you have blue energy for, or Magic Tuna for loads of card draw, or Murderous Imp to repeat 1 damage on opposing creatures or just burn your opponent to death when you get close.

Another implementation for King Matsu is to return all your cards to your hand (except the King himself) before playing Killer Wave, saving your cards to be replayed later while destroying all of your enemy's allies.

Weak against: control decks with direct damage cards or Shoot a Fireball.

Retrieved from "https://occg.fandom.com/wiki/King_Matsu?oldid=4886"
Community content is available under CC-BY-SA unless otherwise noted.