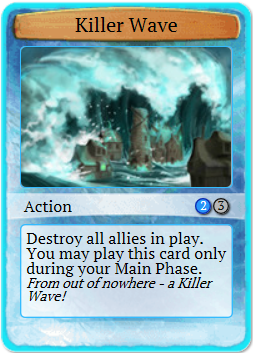 Killer Wave is the best ally elimination action in the game, getting rid of all of your opponent’s allies in one fell swoop, for the cost of only 5 energy. Seems too good to be true, right? Well, it comes with two setbacks:

1) Killer Wave can only be played during your Main phase, so you can’t get rid of any attacking allies with it.

2) It gets rid of both your opponent’s allies and your own, so if you have anything valuable in play, you have to sacrifice it when using Killer Wave.

Retrieved from "https://occg.fandom.com/wiki/Killer_Wave?oldid=4807"
Community content is available under CC-BY-SA unless otherwise noted.