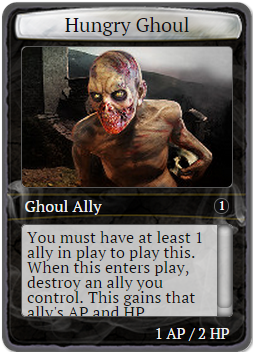 Hungry Ghoul is an interesting card. Despite its single energy cost, it is not a turn-one play. It's great as a black version of Grow Big, taking in a consumed ally's stats and adding to them, with an ability similar to Engorger's. It cannot be used on the defense phase like Grow Big, though, and eliminates all of the consumed ally's abilities. It also feeds the graveyard for Giant Skeleton and Monster Mage to use, as well as giving a bonus +1AP/+1HP to any Soulseekers in play. If this is the type of effect your deck wants, go for it!

Retrieved from "https://occg.fandom.com/wiki/Hungry_Ghoul?oldid=4924"
Community content is available under CC-BY-SA unless otherwise noted.