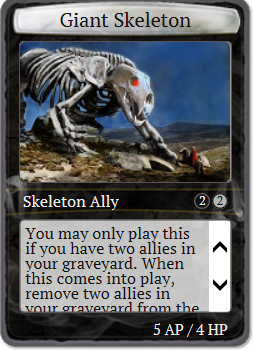 Giant Skeleton is a very solid card. Being the only four-energy ally in the game with raw stats, it can be a big threat in the middle of the game. Giant Skeleton's stats alone can compete with almost any ally in the game with the energy cost of one up to four. The drawback to this card is that you need to have two allies in the graveyard to be able to play it. This means you have to commit to playing it on turn four if you have it in starting hand. The drawback to this card can be somewhat nullified by playing a deck with a lot of allies, and less action/object/trap cards. This way it has a lot less impact on your deck, especially if you're planning to play with Grave Uprisal or Reanimate.

Retrieved from "https://occg.fandom.com/wiki/Giant_Skeleton?oldid=4825"
Community content is available under CC-BY-SA unless otherwise noted.