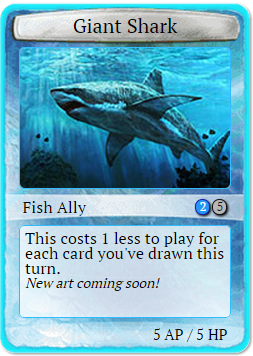 Giant Shark is a 5AP/5HP ally that costs 2 blue energy and anywhere from 0-4 colorless energy. The reason for this is that every time you draw a card its cost goes down by 1 colorless energy, so as soon as you start your turn it decreases from 5 colorless to 4. The easiest way to get it for cheap is using Super Cognition, immediately reducing the cost to 2 blue energy, but Gifts From Above, Decoy, and Magic Tuna work as well. This is a powerhouse creature if you can get it out early, but if you get to the late game you can do a lot worse than an over-priced 5AP/5HP creature. What else are you going to spend energy on at that point anyway? It's a win-win situation!

Retrieved from "https://occg.fandom.com/wiki/Giant_Shark?oldid=4957"
Community content is available under CC-BY-SA unless otherwise noted.