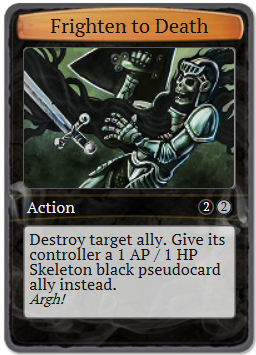 Frighten can be a real help or a real annoyance, depending which side you're on. At 2 black/2 normal energy, it's not very expensive. When played, it turns an ally of your choice into a 1HP/1AP Skeleton Pseudocard and cancels their attack (if they are attacking). You can use this card if a really strong ally is attacking you, like an Evil Incarnate or Earth Elemental. If one of your allies has no AP because of Freeze Trap, using this will at least give it 1HP/1AP. Technically, this card destroys and replaces the target ally, so it can also buff a Soulseeker.

Retrieved from "https://occg.fandom.com/wiki/Frighten_to_Death?oldid=4634"
Community content is available under CC-BY-SA unless otherwise noted.