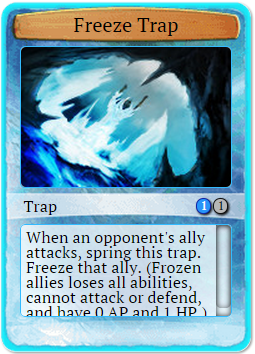 Freeze Trap is a 2 energy (1 blue and 1 colorless) trap card that freezes the first ally your opponent attacks with after this is benched. Use this when you think your opponent is about to attack with a large ally, and you will easily be able to block and kill it. Watch out for when you use this against an opponent playing lots of small allies, as this is usually not worth springing on a low-stat pawn ally.

Retrieved from "https://occg.fandom.com/wiki/Freeze_Trap?oldid=4926"
Community content is available under CC-BY-SA unless otherwise noted.