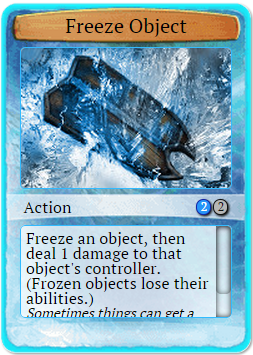 Does your opponent have an object that you just can't beat? Freeze Object will take care of it for the price of 2 blue and 2 colorless energy. It's a lot more costly than Fresh Force, and it doesn't clear the board of all the pesky objects like Cryptic Pillars, but it does deal a damage to the owner of the object in exchange for the cost. It also works during the defense phase, unlike Pillars. A further downside is that if your opponent has any bounce abilities they have a chance to do so as it only Freezes the object, rendering it useless, but still in play.

Weak against: ally-heavy decks and early objects like Orb of Hostility

Strong against: Orb of Unity, Orb of Destruction, Sacrificial Altar, and other annoying objects.

Retrieved from "https://occg.fandom.com/wiki/Freeze_Object?oldid=4959"
Community content is available under CC-BY-SA unless otherwise noted.