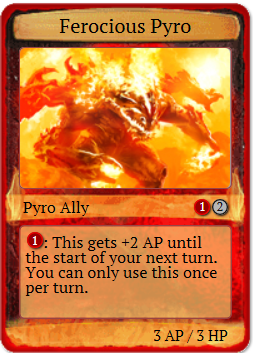 True to its name, the Ferocious Pyro is ferocious-- and can be made even more so, for the price of 1 red energy per turn. With a solid 3AP/3HP, it's fine as it is, making for a good attacker in the early game. With the extra feature, though, Ferocious Pyro is even scarier-- he becomes a 5AP/3AP beast. This feature is best in two situations:

1) When your opponent plays a powerful ally that you want to get rid of, 5AP is usually more than enough to do so.

2) When your opponent has no allies to defend with, attack with a 5AP Pyro for an almost guaranteed 5 direct damage.

Retrieved from "https://occg.fandom.com/wiki/Ferocious_Pyro?oldid=4799"
Community content is available under CC-BY-SA unless otherwise noted.