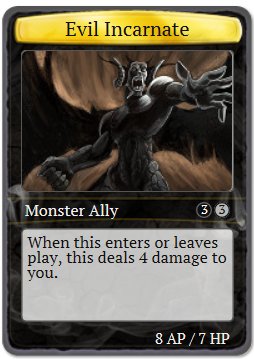 But wait-- what's that say about the 4 damage upon entrance? And exit? And to you instead of your opponent, no less??

Evil Incarnate is a great card, but with a fatal flaw-- it deals 4 damage to you upon entrance and exit, which is 8 damage in all-- almost 2 Burn Souls! So, why is this card useful in the very least? If paired with a few healing cards such as Meditate and Rejuvenate, and played in the late game when you and your opponent have very limited playing choices (due to lack of cards in your hand), the damage becomes insignificant and the raw stats of the card make up for it, potentially taking out your opponent and winning the game.

Strong against: Weak cards or an empty battlefield (call it a field or board, anything) when your opponent doesn't have anything in play to defend with. Also, carelessness and stupidity (there's nothing to stop you from accidentally killing yourself when you play this, so be careful!).

Weak against: High-attack cards that can eliminate Evil Incarnate and make you lose 4HP (again!).

Retrieved from "https://occg.fandom.com/wiki/Evil_Incarnate?oldid=4633"
Community content is available under CC-BY-SA unless otherwise noted.