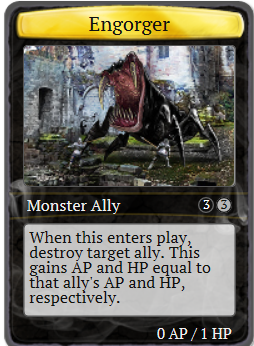 Your enemy has their Soulseeker all buffed up and ready to attack...It looks like you're going to lose-- But wait! You have an Engorger! Now that Souly is yours!

Though it may seem unintimidating at first, with a total 6 energy cost (3 normal and 3 black energy) and only 1 HP and 0 AP, the Engorger can turn the tables of a game quite quickly. As soon as you play it, it eats an ally on the field and takes its stats. For example, a 9AP/9HP fully developed Monster of the Deep becomes a 9AP/10HP Engorger (+1 HP from beginning stats) on your side. You can use this along with a Sacrificial Altar to deal massive damage to your opponent or simply use it as an ally. However, your opponent needs to have a strong card in play to make this card effective-- you can only take the stats of whatever's in play, so if there are a lot of pawns attacking, this card is basically ineffective.

Strong against: Any strong ally or deck with strong allies.

Weak against: Filler decks (quantity, not quality) like green or yellow with lots of ants or weak allies, as well as Frighten to Death and similar cards.

Retrieved from "https://occg.fandom.com/wiki/Engorger?oldid=4626"
Community content is available under CC-BY-SA unless otherwise noted.