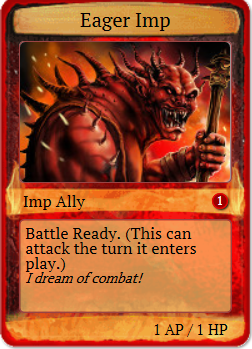 Eager Imp is one of the key cards of the Red Rush strategy, being the only ally that can be played and attack on your first turn. With minimal stats (1 AP/1 HP) and cost (1 red energy), it would be a terrible card, if not for the ability Battle Ready. Battle Ready allows an ally to attack on the turn it’s played, and can either be a pre-set attribute of an ally (such as Evanescent Pyro and Dragon of Fury) or bestowed upon an ally using Orb of Hostility. Eager Imp does especially well when paired with Rile Up or Grow Big.

Retrieved from "https://occg.fandom.com/wiki/Eager_Imp?oldid=4689"
Community content is available under CC-BY-SA unless otherwise noted.