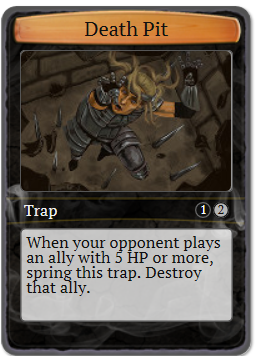 This card works the opposite of Booby Trap,taking out strong allies with 5 HP or more. It has the same cost as Booby Trap at 1 black/2 normal energy, but works against the opposite type of deck. It's good against blue and purple decks and quality decks in general. Against quantity and filler decks like Ants Attack, however, it's practically useless.

Strong against: strong allies and quality decks, as well as blue develop decks and decks with low ally count.

Weak against: filler and quantity decks.

Retrieved from "https://occg.fandom.com/wiki/Death_Pit?oldid=4443"
Community content is available under CC-BY-SA unless otherwise noted.