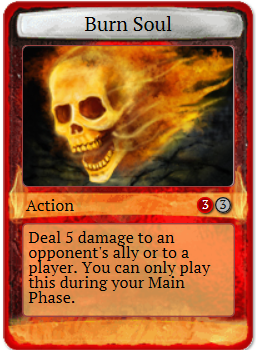 Burn Soul is the strongest direct damage card in Orbs CCG, with one fatal flaw-- it can only be played during the Main phase. When using this in a deck, don't count on it to get rid of any powerful attacking allies for you when you're about to die. Instead, wait to play Burn Soul until after you've got some substantial allies to count on. Still, as long as your opponent doesn't have any Interferes benched and you're careful when using this, Burn Soul is an immensely helpful and powerful card to have in a red deck.

Weak against: forgetfulness (don't forget that it can only be played during the Main phase!), Interfere, heavy healing decks.

Retrieved from "https://occg.fandom.com/wiki/Burn_Soul?oldid=4724"
Community content is available under CC-BY-SA unless otherwise noted.