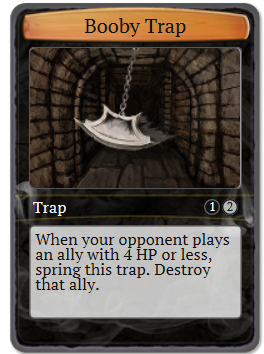 The opposite of Death Pit, allies with 4 HP or lower get instantly destroyed by this benched trap card upon being played. It costs 1 black/2 normal energy to play, and is good against red, yellow and green (quantity, not quality) decks, since they contain mostly low-stat allies. Any allies with HP over 4 can bypass this trap, so for blue develop decks it's mostly ineffective.

Retrieved from "https://occg.fandom.com/wiki/Booby_Trap?oldid=4435"
Community content is available under CC-BY-SA unless otherwise noted.