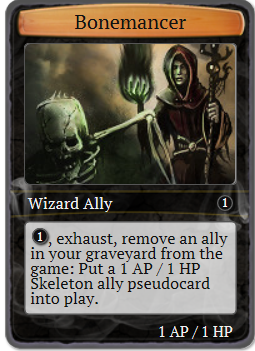 The Bonemancer, although weak (1AP/1HP) and low-cost (1 black energy), can use necromancy to spawn 1AP/1HP Skeleton pawns using corpses from your graveyard. Its stats are lacking, so it's best not to use it to attack, but rather to spam Skeleton Allies for various purposes. If you have a lot of corpses in your graveyard, for instance, you can buff a Soulseeker late in the game by using them to defend against the opponent. It can also be used in conjunction with the opponent's Orb of Unity if you're facing a green deck-- your skeletons will become as strong as their ants, if you have at least a few in play simultaneously. However, be careful against using too many corpses because without any in reserve, you can't play Giant Skeleton, Horrid Skeleton, Skeletal Warrior, etc. or heal Ghoul Lord, Savage Ghoul, etc.

Weak against: Direct damage action cards such as Vampiric Bite.

Retrieved from "https://occg.fandom.com/wiki/Bonemancer?oldid=4629"
Community content is available under CC-BY-SA unless otherwise noted.