"During your Main phase, you may declare an ally as an attacker. Only unexhausted allies that started the turn in play may attack. (You cannot attack with allies you just played.)

During your opponent's Defense phase, they may defend against attackers with any unexhausted allies. Defending causes the defending ally to become exhausted. Attackers may be defended against multiple times. When defended against, the two allies battle.

During battle, both allies deal damage to the other equal to their attack points (AP). If this decreases an ally's HP below 0, it is destroyed. 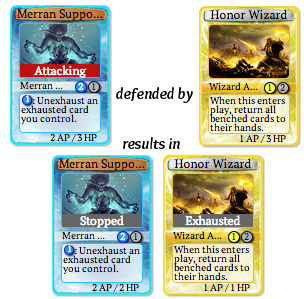 At the end of the Defense phase, any remaining attackers will deal their damage directly to the player.

Damage is permanent while an ally remains in play. This means that a 2 AP / 3 HP that takes 2 damage would permanently become a 2 AP / 1 HP. Some ways to reverse this damage include: using a card that heals allies, or returning the ally to your hand and playing it again."

Retrieved from "https://occg.fandom.com/wiki/Attacking_and_Defending?oldid=4679"
Community content is available under CC-BY-SA unless otherwise noted.