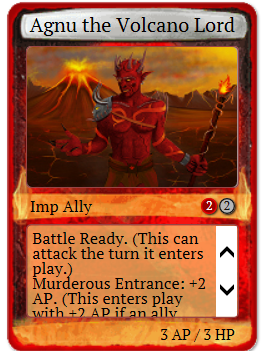 Agnu is a moderately strong card, with 3AP and 3HP, as well as the ability Battle Ready. He becomes much stronger, though, if an ally dies on the turn he enters play-- becoming a formidable foe with 5AP raw damage. The best way to ensure 5AP, instead of only 3, is to bench Agnu and play him after an ally does during your Defense phase. Still, even with just 3AP damage, Agnu the Volcano Lord is a powerful ally to use in the early to middle game.

Strong against: ally-heavy decks (it'll be easier to make sure Agnu gets 5AP if weak allies keep dying) and slow-developing decks.

Retrieved from "https://occg.fandom.com/wiki/Agnu_the_Volcano_Lord?oldid=4722"
Community content is available under CC-BY-SA unless otherwise noted.