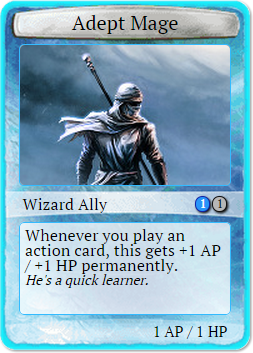 Adept Mage is a 1AP/1HP ally for 1 blue and 1 colorless energy. Seems weak, right? Well, there is more to it than that. Every time you play an action (even if Interfere counters it) Adept Mage grows by 1AP/1HP! In a control deck, Adept Mage can grow twice a turn easily, becoming a powerhouse before you know it. Try pairing this with cards like Super Cognition and Gifts From Above to buff your Mage and fill your hand with more valuable actions. A fun combination is Adept Mage, Super Cognition, Rejuvenate, and The Great Volcano. Watch out for Engorger, Freeze Trap, and Transmute to Butterfly once this card gets going-- they might ruin your strategy!

Weak against: direct damage early in the game, Transmute to Butterfly and Engorger later.

Retrieved from "https://occg.fandom.com/wiki/Adept_Mage?oldid=4930"
Community content is available under CC-BY-SA unless otherwise noted.